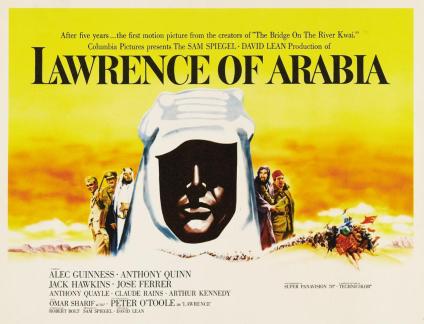 Network Airs Film on Same Date as its 1962 North American Premiere and Presents an Online Picture Album Featuring 50 Rare Production Photos from the Sony Archive
To commemorate the 50(th) anniversary of the Academy Award®-winning motion picture LAWRENCE OF ARABIA, Sony Movie Channel (SMC) is airing the epic film on the exact date of its 1962 North American premiere on Sunday, December 16 at 8:00 PM E/5:00 PM P. On this same day, SMC is launching a breathtaking online picture album containing 50 stunning images from the film–some of which come from Sony’s vast archive. These images are part of a special web page specifically devoted to the film. The album is tablet-friendly with easy swiping action to flip from image to image. The online photo album is available until January 1 and is located at sonymoviechannel.com/lawrence-of-arabia

LAWRENCE OF ARABIA is based on the inspiring true story of WWI British army officer T.E. Lawrence and his involvement in the Arab Revolt against Turkish rule during the late 1910s. In April of 1963, the motion picture won seven Academy Awards® out of its ten nominations.

“LAWRENCE OF ARABIA is considered one of the greatest and most influential films in the history of filmmaking,” said Superna Kalle, general manager of Sony Movie Channel and Cine Sony Television. “With its dramatic score, beautiful cinematography and fascinating storyline, this film is one to treasure now and for future generations. We’re extremely honored to be able to broadcast this epic on the exact day of its original premiere 50 years ago, and provide our fans with SMC’s digital photo album offering 50 images to enhance their viewing experience.”

The photo album for LAWRENCE OF ARABIA is the latest in a continued stream of digital offerings from SMC. The network recently launched a multi-faceted Facebook app to complement JULIE & JULIA, after having success with a similar app for last month’s MOVEMBER event, designed to help raise awareness and funds for men’s health initiatives.