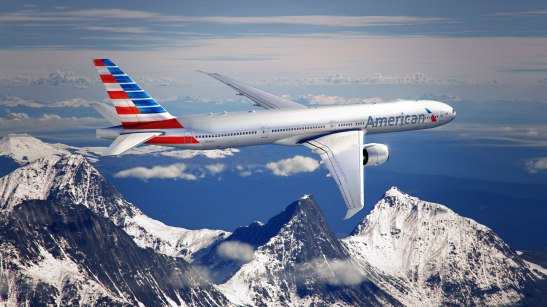 It’s a new year and a fresh new look for American Airlines as the company today unveils a new logo and exterior for its planes, including the already delivered Flagship Boeing 777-300ER aircraft set to fly on Jan. 31.  In addition, American plans to continue taking delivery of new planes this year as part of its historic orders for 550 new aircraft.  The unveiling of the new logo and livery is the latest step forward in American’s ongoing journey toward building a more modern travel experience for its customers.

“Since placing our landmark aircraft order in July of 2011, we’ve been building anticipation toward a moment in time when the outside of our aircraft reflects the progress we’ve made to modernize our airline on the inside,” said Tom Horton, American’s Chairman and CEO. “While we complete the evaluation of whether a merger can build on American’s strengths, we remain steadfast in each step we take to renew our airline, a step we take with great respect for our name American. Today marks important progress in that journey as we unveil a new and updated look for the first time in more than 40 years.”

American is preparing to take delivery of hundreds of new, lighter aircraft featuring composite materials that must be painted.  Since the polished metal look was no longer an option, the importance of the paint selection became critical to honoring American’s silver bird legacy. Silver mica paint was chosen as a way to maintain the silver heritage which American’s people and customers are passionate about, yet progress ahead with a clean new look.

“Our new logo and livery are designed to reflect the passion for progress and the soaring spirit, which is uniquely American,” said Virasb Vahidi, American’s Chief Commercial Officer. “Our core colors — red, white and blue — have been updated to reflect a more vibrant and welcoming spirit. The new tail, with stripes flying proudly, is a bold reflection of American’s origin and name. And our new flight symbol, an updated eagle, incorporates the many icons that people have come to associate with American, including the ‘A’ and the star.”

Since entering the restructuring process, American has made a series of strategic investments designed to place customers at the center of all it does and give employees the tools, training and leading technologies they need to provide customers with a uniquely American experience, while also creating growth and opportunity for its people.

Today’s news is a reminder that while there are still significant decisions that need to be made about the future of the company, American remains focused on continuing the forward movement of the many investments that have been announced in the past year, including:

—  Industry’s Most Modern Fleet: This year, American will take delivery of
nearly 60 new aircraft, including the new Boeing 777-300ER which will
enter into service on Jan. 31.  In July, American will begin taking
delivery of Airbus aircraft made of lighter, more fuel efficient
composite materials, which must be painted. The airline continues
investments to offer state-of-the-art inflight Wi-Fi, in-seat
entertainment, universal AC power outlets at every seat, and Main Cabin
Extra seating on all mainline aircraft. In addition, American has plans
to offer fully lie-flat premium class seats on all of the airline’s
widebody aircraft and transcontinental fleet.
—  Expanded International Service: American strengthens its network this
year with expanded service to more destinations worldwide, including
more international and domestic routes from Dallas/Fort Worth, more
European and domestic service from Chicago O’Hare, new service to Europe
from New York, and new service from Miami to Latin America and the
Caribbean.  This year, American also will begin the following
international services: Dallas/Fort Worth ? Seoul, South Korea;
Dallas/Fort Worth ? Lima, Peru; Dallas/Fort Worth – Bogota, Colombia;
Chicago O’Hare ? Dusseldorf, Germany; New York JFK ? Dublin, Ireland;
Miami – Pointe-a-Pitre, Guadeloupe; Miami – Fort-de-France, Martinique;
Miami – Curitiba, Brazil; and Miami – Porto Alegre, Brazil.
—  Information in an Instant: The airline announced plans to supply flight
attendants, pilots, and maintenance workers with their own tablet
devices, designed to give them real-time information and better
operational insights to do their job more efficiently. Beginning next
month, employees will also be equipped with new technologies at the
airport designed to make the travel experience easier and more
convenient.
—  Top-Notch Onboard Experience: Earlier this month, the airline rolled out
new enhancements in premium class cabins on international routes,
including elegant new china, more menu choices, and a more personalized
service similar to a restaurant. In addition, American will expand the
availability of Samsung Galaxy tablets for entertainment use in the
premium cabins to more routes later this year.
American Eagle and the AAdvantage® program also will get a new look as of today. The first American Eagle plane will fly the new livery beginning in February. Updating the new look across American’s network is a long process and will be rolled out over time to the airline’s airports, interiors and exteriors of aircraft, new uniforms, products and services, and technology platforms like AA.com and the American mobile apps.

American’s new look was created with input from our customers and our people, and in partnership with FutureBrand – a leading global brand consultancy. In addition, American today launches a new advertising campaign designed to showcase the new look. The advertising campaign was developed with agency partner McCann Worldgroup.

For more information on American’s new look, and to keep up with progress as the brand rollout continues, visit aa.com/newamerican.

About American Airlines
American Airlines focuses on providing an exceptional travel experience across the globe, serving more than 260 airports in more than 50 countries and territories. American’s fleet of nearly 900 aircraft fly more than 3,500 daily flights worldwide from hubs in Chicago, Dallas/Fort Worth, Los Angeles, Miami and New York. American flies to nearly 100 international locations including important markets such as London, Madrid, Sao Paulo and Tokyo. With more than 500 new planes scheduled to join the fleet, including continued deliveries of the Boeing 737 family of aircraft and new additions such as the Boeing 777-300ER, and the Airbus A320 family of aircraft, American is building toward the youngest and most modern fleet among major U.S. carriers. American’s website, AA.com(®), provides customers with easy access to check and book fares, and personalized news, information and travel offers. American’s AAdvantage(®) program, one of the most popular frequent flyer programs in the world, lets members redeem miles for flights to almost 950 destinations worldwide, as well as flight upgrades, vacation packages, car rentals, hotel stays and other retail products. The airline also offers nearly 40 Admirals Club(®) locations worldwide providing comfort, convenience, and an environment with a full range of services making it easy for customers to stay productive without interruption. American is a founding member of the oneworld(®) alliance, which brings together some of the best and biggest airlines in the world, including global brands like British Airways, Cathay Pacific, Iberia Airlines, Japan Airlines, LAN and Qantas. Together, its members serve more than 900 destinations with more than 9,000 daily flights to 150 countries and territories. Connect with American on Twitter @AmericanAir or Facebook.com/AA. American Airlines, Inc. and American Eagle Airlines, Inc. are subsidiaries of AMR Corporation. AMR Corporation common stock trades under the symbol “AAMRQ” on the OTCQB marketplace, operated by OTC Markets Group.