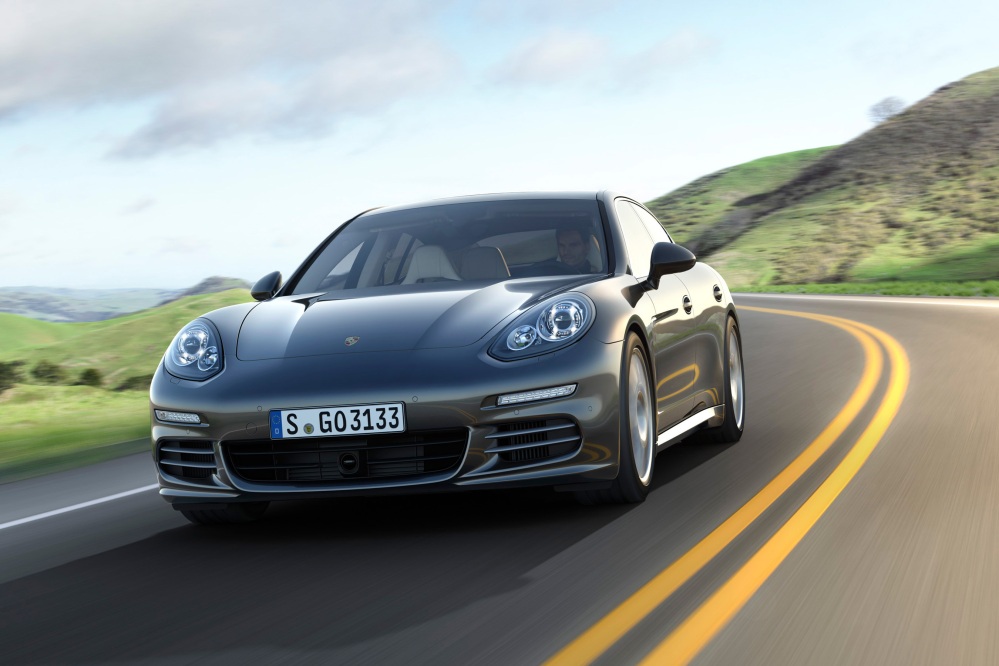 The Porsche Panamera sports sedan lineup expands for the 2014 model year with the addition of three new variants: the Panamera S E-Hybrid, the first plug-in hybrid from Porsche; and two luxurious Executive versions based on the Panamera 4S and Panamera Turbo models.

A new 3.0 twin-turbo V6 engine replaces the previous 4.8-liter V8 engine in the Panamera S and Panamera 4S. The new engine is also used in the new Panamera 4S Executive and offers an additional 20 hp and 15 lb.-ft. of additional torque, with an increase of up to 17 percent in fuel economy compared to the V8 engine in the previous model. With this launch, the Panamera line-up now increases to nine individual models available in the U.S. market that offer an expansive range between sportiness and comfort.

The new Panamera S E-Hybrid improves the previous Panamera S Hybrid with a more powerful electric motor, and a higher-performance battery that supplies more energy and is able be recharged from home or public charging stations. The electric drive produces 95 hp, double the power of the previous model’s electric motor (47 hp). Electricity is stored in a newly developed lithium-ion battery, which at 9.4 kWh has increased capacity over the previous battery (1.7 kWh). Via the integrated on-board charging componentry and the standard Porsche Universal Charger (AC), the battery can reach full charge within approximately two and a half hours when connected to a 240V power source. The Panamera S E-Hybrid is capable of accelerating from a standstill to 60 mph in 5.2 seconds on its way to a top track speed of 167 mph.

For the 2014 Panamera Turbo; power was increased by 20 hp to 520 hp, while its highway fuel consumption improved by four percent to 24 EPA mpg. The added power lets the top model sprint from zero to 60 mph in as little as 3.7 seconds, and its top track speed has increased by one mph to 189 mph.

The naturally aspirated V8 engine in the new Panamera GTS has also improved for 2014, by 10 hp to 440 hp, along with a four percent increase in highway mpg according to the EPA. The 2014 Panamera GTS now accelerates from zero to 60 mph one tenth of a second faster (4.2 seconds).

Pricing details are as follows:

*Base pricing does not include options, taxes, dealer charges and a destination fee of $975.

About Porsche Cars North America
Porsche Cars North America, Inc. (PCNA), based in Atlanta, Ga. is the exclusive U.S. importer of Porsche sports cars, the Cayenne SUV and Panamera sports sedan. Established in 1984, it is a wholly-owned subsidiary of Porsche AG, which is headquartered in Stuttgart, Germany, and employs approximately 220 people who provide parts, service, marketing and training for 189 dealers. They, in turn, work to provide Porsche customers with a best-in-class experience that is in keeping with the brand’s 63-year history and leadership in the advancement of vehicle performance, safety and efficiency.

At the core of this success is Porsche’s proud racing heritage that boasts some 30,000 motorsport wins to date.