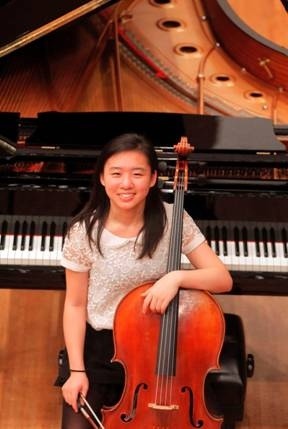 Zhang will perform on both cello and piano during the February 8 & 9 concerts, featuring works by Rachmaninoff and Tchaikovsky.

The orchestra’s Super Series is sponsored by Darden Restaurants Foundation and the Corporate Sponsor for this concert is Aloft Orlando Downtown. The guest artist is generously sponsored by Dr. Leonard and Seline Dreifus.

At just 18 years old, Juilliard student and rising star Sarina Zhang has accumulated an impressive array of awards for her dual talent, and has been featured on PBS’s “From the Top” four times, performing on both cello and piano.

Zhang says the two works she will perform are very contrasting. “You have the Rach 3, which is lengthy and really heavy music,” she said. “The Tchaikovsky is really calm and relatively short.”
Zhang has won many awards, most recently as a 2013 YoungArts National Finalist. Zhang won first place in the Juilliard Pre-College Piano concerto competition in 2012 with Juilliard Pre-College Orchestra, was a prizewinner at the 2012 Cooper International Piano Competition and alternate at the 2012 Aspen Music Festival’s piano concerto competition. Among her other accolades, she was a finalist at the 2013 Klein International String competition and awarded 1st place in the 2010 Aspen Music Festival’s low strings competition. In 2009, Zhang won the Juilliard Pre-College Dvorak Cello Concerto Competition and was named a 2009 Davidson Fellow by the Davidson Institute for Talent Development. In the same year, Sarina won the New York Ensemble 212 Young Artist Competition. She was awarded 1st place in the 2008 Connecticut International Young Artist Competition for piano as well as 2nd place for cello, and the special prize in the New York Grand Prix International Piano Competition. She made her debut with the New York Philharmonic in Avery Fisher Hall in November 2011.

Now entering its 21st season, the Orlando Philharmonic is Central Florida’s resident professional orchestra, comprised of accomplished musicians recruited from around the world. With more than 125 performances each year, the orchestra provides captivating musical experiences to people of all ages, provides enriching education programs for students and adults, and helps build a rich, sustainable future for symphonic music in the Central Florida community. Learn more at http://www.orlandophil.org.