ORLANDO – Told of stories of children showing up to elementary school on Monday mornings with headaches and stomach distress because they had eaten little to no food over the weekend, Orlando Magic CEO Alex Martins realized the full gravity of Central Florida’s hunger crisis and knew his organization had to do something to help out. 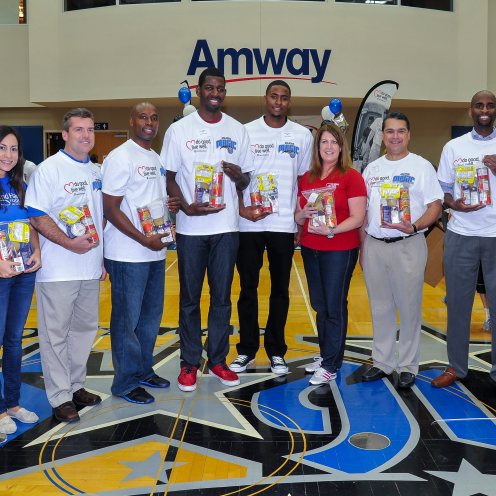 Magic CEO Alex Martins joined 300+ Magic staffers and UnitedHealthcare employees to assemble 13,500 food packs as part of the Magic and UHC’s efforts to fight childhood hunger in Central Florida. The packs will be donated to the Second Harvest Food Bank of Central Florida as part of their Hi-Five Kids Packs Program. Photo taken by Fernando Medina. .

Magic CEO Alex Martins (left) and Magic player Maurice Harkless (right) joined 300+ Magic staffers and UnitedHealthcare employees to assemble 13,500 food packs as part of the Magic and UHC’s efforts to fight childhood hunger in Central Florida. The packs will be donated to the Second Harvest Food Bank of Central Florida as part of their Hi-Five Kids Packs Program. Photo taken by Fernando Medina.

More than 300 Magic staffers and UnitedHealthcare employees joined forces to assemble 13,500 food packs as part of the Magic and UHC’s efforts to fight childhood hunger in Central Florida. The packs will be donated to the Second Harvest Food Bank of Central Florida as part of their Hi-Five Kids Packs Program. Photo taken by Fernando Medina.

More than 200 Magic staffers teamed with 100 employees from UnitedHealthcare (UHC) on Thursday to construct 13,500 Hi-Five Packs that will be provided to underprivileged children in Central Florida. The hope is that the packs will give underserved children food to eat on weekends when they don’t have access to food programs at school.

“It totally breaks my heart to know that here in Central Florida and Orlando that there are children who have very little food to eat over the weekend and their only option is to eat when they get back to school,” Martins said. “Hopefully programs like this will bridge the gap and kids won’t have to go hungry over weekends.”

The supplies go to The Second Harvest Food Bank of Central Florida, which partners with 23 public elementary schools in the Orange, Seminole and Lake County area to distribute the Hi-Five Kids Packs to children participating in the free or reduced-cost lunch programs.

“We’re very excited at UnitedHealthcare to be a part of this with the Magic being one of our trusted clients and one of our partners and to work side-by-side with The Second Harvest Food Bank,” UHC Account Executive Alex Good said. “This falls right into our mission of “Do Good, Live Well.” of fighting hunger and obesity. We’re just so excited about doing what we can to help the kids in the Central Florida community.”

Hennigan and Vaughn took a break from their busy schedules to help out on Thursday with assembling the meals for the children. Hennigan spent his time going up and down the line of food and packing it into bags. Vaughn was the front of his line readying bags for Magic staffers to fill with food for the children.

“Any time you can create a community outreach program, it’s a positive. And then when it also involves children and hunger issues and combating that, it makes you feel good about making a difference in their lives,” Hennigan said.

Said Vaughn: “When you stop for a second and think about the hunger problems that we have in this country and kids being hungry over the weekend, it makes you realize how fortunate we are and that there are a lot of people out there in need. It’s simple what we’re doing, taking a little time to pack these bags, but there’s a complexity behind it. There are a lot of issues that need to be addressed with hunger in our country. Just doing something that will help these kids, help them learn and be able to function in school, it’s so important.”

Harkless, who scored 15 points and had five steals for the Magic on Wednesday night, was more than willing to give up his off day to be a part of Thursday’s community outreach program. Harkless admitted that it was heartbreaking to him to know that kids in the Central Florida area – many of them Magic fans – have to go hungry over weekends. That’s why Harkless was right there with Nicholson in the assembly line on Thursday to make the Hi-Five Packs.

“You think about how many kids there are out there who just don’t have much at home and being able to provide them with a lunch or dinner it’s amazing,” Harkless said.

Added Nicholson, a Canadian by birth: “Hunger is such a big issue in the states and everywhere. The fact that we’re here helping contribute to a solution for kids who need food it’s a great feeling.”

Shannon Loecher, UHC’s director of social responsibility, marveled at the large number of staffers from both the Magic and UHC working together for a common cause. She said that Thursday’s food-packing event in Orlando was the largest and most ambitious one that she’s ever been a part of.

Martins raved about Magic staffers’ willingness to uphold the organization’s mission to be “world champions on and off the court, delivering legendary moments every step of the way” by contributing more than 6,000 hours of community service last year. Also, in the last year the Magic have donated more than $2 million in grants to nonprofit organizations, many of them focused on the needs of children in Orlando. Clearly, the Magic are serious about their mission to make a meaningful difference in the community.

“We want to be champions off the court just as much as we do on it, and that means making a difference in our community,” Martins said. “We’ve focused on youth and kids in our outreach efforts throughout the 25 years that we have been here in Central Florida. Unfortunately, issues like hunger are ones that we have to deal with in our community. This is just a small way for us to give back while also making a positive impact on these kids who may not have had a meal over the weekend were it not for a program like this.”

Added Vaughn: “With the Magic, the talk of making a difference in the community is backed up with actions. Whether it’s with monetary donations, time spent or events – it all starts with our owner, Mr. (Rich) DeVos and how he’s been committed to this community since Day One. I’m glad that hasn’t changed.”

The Orlando Magic celebrates 25 years of Magic basketball both on and off the court.  The Magic’s commitment to Central Florida is celebrated in its Silver Season with 25 years of giving through more than $40 million donated to the local community by way of event sponsorships, donated tickets, autographed merchandise, scholarships and grants over the years.  Through a quarter century of giving, Magic community programs have impacted nearly two million total youth along with more than 5,000 player and community ambassador appearances. The Magic continues its quest to be champions on the court and in the community and looks toward a city that flourishes through a collaborative effort of the Magic’s coaches, players, employees, partners, fans and Central Floridians.  To learn more about the Magic in the community, visit http://www.nba.com/magic/magic-in-the-community.