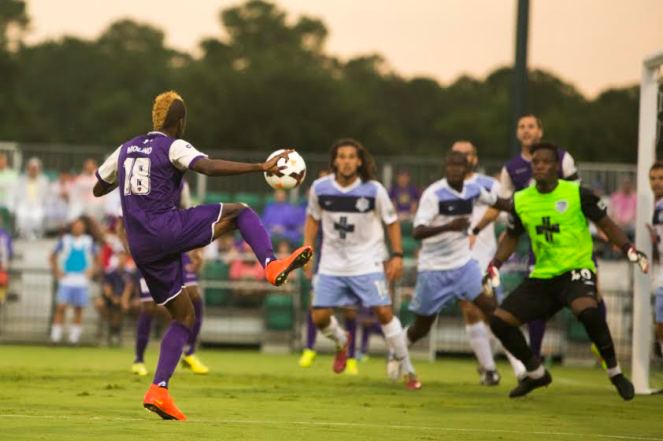 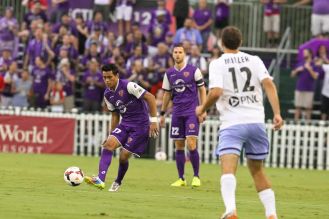 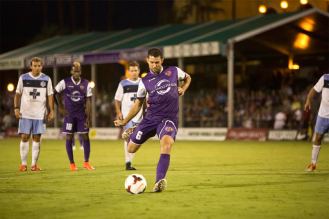 “I’m obviously delighted to get the win and keep the run going, which is important,” said Head Coach Adrian Heath after the match. “I thought that there were some excellent performances on our end. We dictated things throughout the entire game and probably had the ball for most of the evening.”

Due to the wet conditions, both sides had a slow start in the opening minutes as they tried to feel each other out. The first sign of action came in the 7th minute when Kevin Molino drove a low effort that skipped just wide of the target.

Four minutes later, Tommy Redding nearly scored his first goal of the 2014 campaign from a deep corner served into the box from Darwin Ceren. The El Salvadorian’s corner was floated to the back-post and Molino knocked it back into the danger area for Redding, whose effort was cleared off the line.

The majority of the first half featured keep away football as Orlando was in full control of possession, forcing Wilmington to chase shadows all over the pitch. When Wilmington did manage to gain possession, the Lions’ midfield and defense closed them down quickly.

As the half progressed, Orlando’s possession finally created an end-product when Dennis Chin found the back of the net in the 33rdminute. The goal was the result of good build-up play on the edge of the area with quick one-touch passing that saw Molino find Chin in the box with ample space. Heading into tonight’s match, the Oviedo native hadn’t scored since bagging a brace against OKC on May 4but tonight he displayed clinical proficiency with a calm finish past Roberts.

To open up the second half, Orlando found the back of the net once again after Kevin Molino was clumsily fouled by Sammy Ochoa inside the area, resulting in a penalty being awarded in Orlando’s favor in the 49th minute. Veteran midfielder Anthony Pulis converted the penalty, sending Roberts the wrong way as he placed his effort in the bottom right-hand corner.

Molino nearly added a third in the 60th minute and the 89th minute, but a big save from Roberts and a foul called by the referee kept the club’s first MLS signing off the score-sheet as he aims to jump back into first place on the USL PRO scoring table.

New signing Giuseppe Gentile made his first appearance in purple and white when he was brought on by Head Coach Adrian Heath in the 75th minute. The former Chicago Fire striker nearly scored in the 87th minute with a clever flick, but Roberts once again managed a big save to prevent further damage.

City will now begin preparing for its upcoming road fixture against Sacramento. The California-based club will prove to be a strong test for Orlando as they look to extend the unbeaten run and a 13 point lead over the Richmond Kickers.