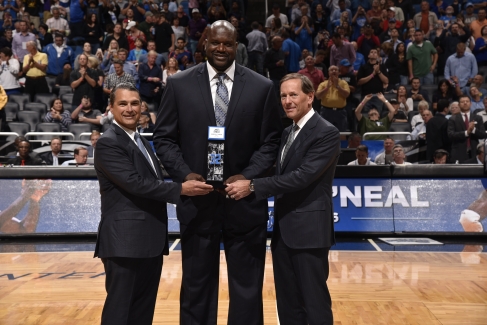 The Orlando Magic inducted perennial NBA All-Star Shaquille O’Neal into its Hall of Fame today, March 27, in Amway Center, near the Nutrilite Magic Fan Experience. O’Neal becomes the third inductee into the Magic Hall of Fame. In addition to the induction ceremony, O’Neal was honored during the Magic’s matchup vs. Detroit that night.

“The Orlando Magic are honored to recognize those who have made significant contributions to our history,” said Magic CEO Alex Martins. “Shaq made a tremendous impact on our franchise during his time with us and we are thrilled to recognize him as our third inductee into the Magic Hall of Fame. He carries on a great legacy of those who made the greatest contribution to the rich history of the Orlando Magic.”

“It’s a great honor and really, really unexpected,” O’Neal said. “When I got the call, I couldn’t believe it. But me and the DeVos family, we kept a close relationship even after I left in 1996. We’ve done a lot of business together and personal things together. The DeVoses were always a first-class family and (it’s) a first-class organization.”

The Magic unveiled its inaugural Hall of Fame class on April 9, 2014 naming the first two inductees, Magic co-founder and Senior Vice President Pat Williams and the team’s first-ever draft pick and current Community Ambassador Nick Anderson. The Magic Hall of Fame honors and celebrates the great players, coaches and executives who have had a major impact during the team’s illustrious 26-year history. The inductees are selected based on their overall on and off the court contributions to the team and organization, years of service, impact in the community and general character of the individual.